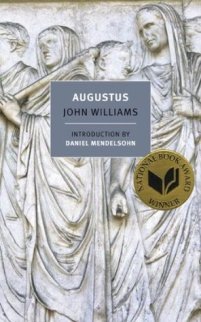 “It is fortunate that youth never recognizes its ignorance, for if it did it would not find the courage to get the habit of endurance. It is perhaps an instinct of the blood and flesh which prevents this knowledge and allows the boy to become the man who will live to see the folly of his existence.”

Augustus by John Williams retells the history of Gaius Octavius Thurinus, a young Roman nobleman who was the named heir of Julius Caesar. Stepping into a world of assassination, corruption and war, we read from the perspective of a large number of people as he attempts to remake the world as he sees fit. The world, however, makes those who strive for greatness pay a heavy price.

Despite the enormous power Augustus wields, what makes this novel interesting is the presentation of such an extraordinary person as relatable and sympathetic. This is an undoubtedly smart man who seizes circumstance with great skill, but is ultimately just a man despite pretensions to Godhood; he’s no more powerful or pitiable when left alone with his regrets than anyone else.

It’s impossible for me not to make comparisons with William’s prior novel Stoner, which I finished recently and thought was a masterpiece. Augustus is understandably very different in tone; it’s like taking in a bombastic orchestra after enjoying an intimate show by a single man with a guitar. Yet this still feels like the more warm novel of the two despite the grand scale and bloody subject matter; themes revolve around failure like in Stoner, yes, but there is a stronger focus on friendship and politics, with a warm humanism about the former and exasperation with the latter.

This novel is about Augustus as a man, yes, but is also about the way experience carves a person out of the mountain of their hopes and ambitions, discarding the rubble we used to see as our innate self. In other words: no matter how hard you try, the world and its coincidences and tragedies will shape you far more than you can ever shape it in return.