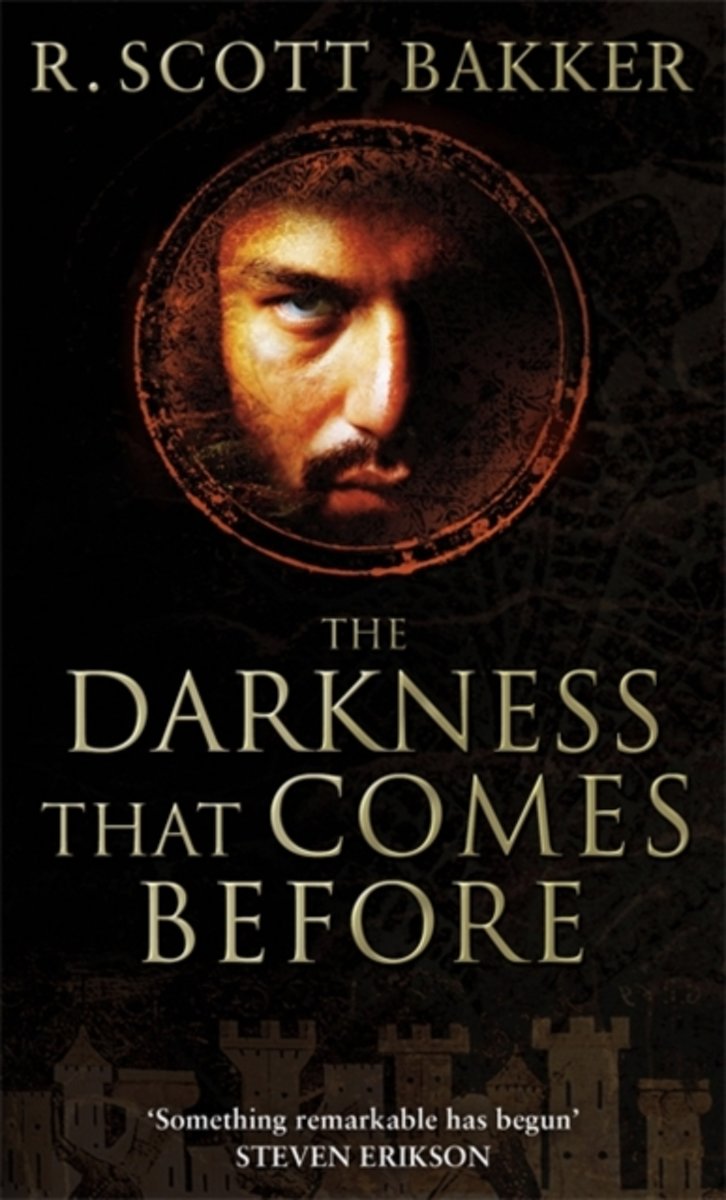 “History. Language. Passion. Custom. All these things determine what men say, think, and do. These are the hidden puppet-strings from which all men hang.”

The Darkness that Comes Before is both thoughtful and brutal fantasy, like Game of Thrones mixed with the surreal politics of ancient Rome. Fascinating systems of faith, magicks and social interaction weave together a world which feels dangerous and realistic. There is religion, but also blind faith and ignorance; there is learning and philosophy, but nearly always toward foul ends; there is magic, but it can’t do much other than pure destruction.

There are webs of intrigue here which make Westeros players seem like amateurs; plans which span centuries, plans with higher and darker aims than the conquering of just a kingdom.

When I began this hulk of a book, I was worried. The seeming protagonist in the prologue was good at everything he did; he appeared to have a special destiny; the first person he met adored him. “Ah,” I thought. “Here’s the typical boring fantasy hero. Yawn.” This seemingly perfect character then abandoned a terrified farmer (and his dogs, the bastard) to be eaten, out of nothing but pure selfishness. It was then I realised that I may be in for something a little different, somethign intruiging which could eschew the idealism of Tolkien and the boring, thoughtless cynicism of many modern fantasy authors.

The person we spend the most time with is the spy-sorceror Achamian, and this is unfortunate as he’s the least engaging out of the sprawling cast of this novel. His sections are heavy on exposition and light on intrigue; as we have seen this world from wildly different perspectives, we often know more than Achamian does… and yet whenever he makes a discovery it’s treated as though the reader should be surprised too. This makes his sections a slog, although they thankfully become less common as the novel goes on.

The most interesting characters are Anasûrimbor Kellhus and Cnaiür urs Skiötha. The former is a manipulative superhuman with inscrutable motives, while the latter is a fearsome warrior in the Khal Drogo vein who is both highly intelligent and cripplingly insecure. They stood out from the large cast because they were incredibly hard to predict; they fell into some standard fantasy archetypes, certainly, but were strong enough as individuals that I was always fascinated to see what decisions they would decide to make. Kellhus’ backstory was particularly engaging, with riffs on transcendental meditation and philosophy which felt very fresh for this type of fantasy setting.

Yet when I got to the final page and realised things were going to end on a cliffhanger, I was pissed off. The Darkness that Comes Before makes the typical mistake of a first book in a series: assuming that just because questions may be answered in later novels no closure is needed in this one. As a result it’s difficult to recommend, as — even though the world and some of the characters were fascinating — I have no desire to read another two thousand pages in a similar vein, despite that I really enjoyed this. There are too many books in the world and too little time.