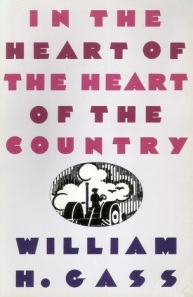 “I want to rise so high that when I shit I won’t miss anybody.”

Some authors examine characters; Gass dissects them. His writing cuts into the inner workings of the human mind like a scalpel, and even if you don’t enjoy what’s being shown you will recognise it as similar to something deep within yourself.

Reading In The Heart of the Heart of the Country is like staring at a house-fire: the spectacle may be aesthetically beautiful, but it’s ultimately just depressing as it’s the cause of so much misery. Kafka said that “we need books that affect us like a disaster, that grieve us deeply, like the death of someone we loved more than ourselves, like being banished into forests far from everyone, like a suicide. A book must be the axe for the frozen sea within us.” Normally, I would agree. This short story collection strayed too far from trying to provide narrative satisfaction, though; Gass doesn’t just illuminate the disgusting elements of life, he wallows in them. The result is emotionally numbing.

The prose is intricately written, with complex sentence structures and occasionally confusing dialect (although Gass knows how to temper his own intelligence based on whether it is appropriate for his characters; many authors lack this self-awareness). A number of the stories here fall into the dreaded short story trope of “middle aged man contemplates the meaning of clouds,” although the first — “The Pedersen Kid” — has an interesting set-up and multiple engaging characters. Things soon settle into monotony, however. Three hundred pages of nihilism is going to be dull no matter how intricate the writing.

Gass said that “these stories emerged from my blank insides to die in another darkness.” Regardless of its lack of commercial success, and even if its grotesqueness makes it difficult to love, it’s hard to deny that In The Heart of the Heart of the Country is extraordinarily well written. It will make readers gag, but still feels true to the despicable parts of our world. However, the stories are so relentlessly ugly and cynical that I couldn’t escape the feeling that it was written out of pure spite rather than a desire to engage the reader in a truly meaningful way.