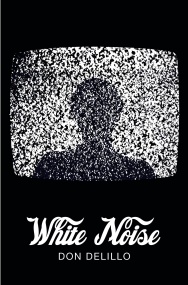 “Mainly we looked at people in other cars, trying to work out from their faces how frightened we should be.”

White Noise, the 1980s television obsessed fever-dream of a novel by Don Dellilo, is a confusing read. It has a lot in common with other books from this era — a fixation with pop-culture, for one — but is an original and satisfying read thanks to both its great writing and pointed satire.

In a lot of postmodern novels, a quick way to sum-up the protagonist would be to say that they’re incapable of truly loving someone. That they can’t escape their own head, their own narcissism. Jack, the protagonist of White Noise, isn’t like that. At least, not entirely. That’s part of why this book is much more affecting than other novels which try for a similar tone. Jack’s a caring father and husband; emotionally stunted, yes, with a brain warped by the deeply confusing consumer-obsessed society around him, but we still feel for him because he’s clearly a very confused man who means well. We pity him, too, because like everyone else in this novel he’s searching for meaning, and like everyone else in this novel he’s unlikely to find it.

I found Delillo through a biography of David Foster Wallace, where he was named as one of Wallace’s major influences (overshadowing even Pynchon). That was true; you can see echoes of Wallace’s distaste for television, along with the educated characters who try to communicate with others only to end up talking nonsense.  What I found fascinating, though, was how well this book has aged — it’s over thirty years old, and the absurd plot-lines, characters and humour are still fresh. This can probably be attributed to its ridiculously well-crafted sentences, which make reading even well-trod ideas a treat.

It gave me the feeling that gears were turning inside my own head, whirring and pondering new plot-lines and parables. This confusion was intentional on Dellilo’s part: the reader is trying to to make sense out of senselessness, trying to find music in noise. But there’s nothing there; it’s just static. It’s worth pointing out that White Noise is also hilarious, though. If it doesn’t sound like a comedy, that’s because it’s just funny like Louis CK’s show Louie is funny: it points out absurdities and pointlessness in society and makes you laugh despite yourself. In other words, it’s a black, black comedy.

I kept jotting notes while reading White Noise; it was like a compulsion. Every chapter raised new questions but never handed out answers, and that’s something that I’ve found tiresome and trite in other novels. Dellilo is funny enough that the book never stops being enjoyable, and smart enough that you come away with a lot of interesting ideas, even if it may take a while to piece them all together.