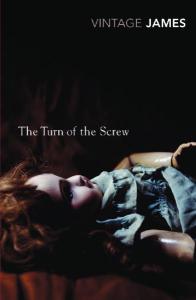 “I had plenty of anguish after that extraordinary moment, but I had, thank God, no terror.”

The Turn of the Screw tells a ghost story set in a haunted house. Good. Our protagonist is a woman who has been given charge of two unsettlingly perfect children, and she may or may not be going mad. Great!

So what happened? How did Henry James create the literary equivalent of Nyquil out of such an exciting premise?

There is, buried deep, a chilling story here, with plot-twists, difficult choices, and keen lines which express the constantly frayed emotions of our dismayed protagonist. This would be easier to review if nothing had happened plot-wise, because then the utter boredom a book as fast-paced and psychologically insightful as this would have had a stylistic point that could be blamed.

The problem is that sentences wind and curl around what they’re trying to say until you’re too distracted to care anymore. After ten pages, you’re confused; after fifteen, you’re irritated; after twenty, you’re asleep.

James keeps you guessing as to whether the threat is coming from the supernatural or the narrator’s own mind, and you can reverse-engineer the popularization of a number of modern horror tropes to this novel. But maybe its success is why it’s such a slog to finish now, despite the tiny length. If so many modern stories hadn’t plundered the best elements, there might be more to distract from the writing itself; instead, this book becomes yet another example of Seinfeld is Unfunny.

It’s not simply a product of its time, though. There are authors just as verbose who have managed sophisticated, layered writing without accidentally creating a cure for insomnia. For example, Melville, Dostoevsky, and Eliot are all enhanced by their layered and elevated prose, not smothered in it. As it is, The Turn of the Screw’s fascinating premise was crushed under the weight of James’ waffling.