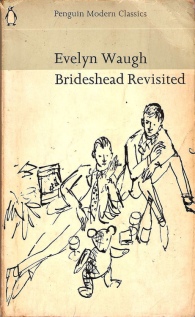 I began to write this review of Brideshead Revisited almost immediately after I put the book down. That’s rare. Normally I take a day or two to mull things over, and let my reaction settle, but the ending here made me dissapointed and I wanted to vent. That’s rare, too. I like books a lot more often than I dislike them. Vonnegut was probably an influence on the way I approach reading, although I’m not quite as forgiving as he is:

“As for literary criticism in general: I have long felt that any reviewer who expresses rage and loathing for a novel or a play or a poem is preposterous. He or she is like a person who has put on full armor and attacked a hot fudge sundae or a banana split.”

This is true to a degree. Unless an author is knowingly, maliciously wasting my time or looking to be deliberately condescending or irritating – and I’d like to give most published authors the benefit of the doubt on this front, as (outside of maybe Ellis) writers tend to have bigger aims than expressing their own misanthropy – I will set the book down, realize that it probably just wasn’t for me, and move on.

Brideshead Revisited’s ending made me annoyed because it deflated a novel which I had been enjoying tremendously. It’s a very, very well written book with acutely drawn characters, and is a great evocation of a lost time. It also has one of the most unsatisfying few pages that I’ve ever read, a conclusion that undercuts what I had previously enjoyed about the story and themes.

Waugh is at his best when he’s rolling in moral decay. At the start, I thought this novel was a direct descendant of The Great Gatsby, due to both its intricate and beautiful language and the acute representations of the upper class as hedonistic and morally bankrupt. Unfortunately, while the drama and writing – which are surface level elements of all stories, despite how much I love them both – maintain the high level reached earlier in the novel, the simple (yet, in hindsight, inevitable) way the problems addressed are dealt with left me unsatisfied. Theology is an interesting subject, but it felt both hamfisted and a unsatisfying here as I thought the characters’ religious beliefs were only one of many issues that should have been addressed.

What Brideshead is best at is conjuring a longing, an affection close to nostalgia, for a place you’ve never been. The language is, as mentioned, intricately put together and at times beautiful. It can also be pompous to the point of ridiculousness, which was fine when I thought Waugh was in on the joke and Ryder’s gushing was to show that he had been suckered in by this obvious mess of a family. But the reader is the one that had been suckered in. He wants you to worship these tortured, vaguely pathetic souls too. It all just comes across as overwrought when you realise Waugh’s being total and utterly sincere in his worship of the “elites”.

Brideshead Revisited isn’t, as it appeared from its first two-thirds, an examination of the indulgences of this upper-class. It’s a celebration of them. It’s a mournful wail at a world which let a world of manor-houses, beautiful dining, and charm die.

One of the clearest examples of this misguided fawning was when Ryder reflects on how unfair it was that many in the noble upper-classes had died to maintain modern England: “These men must die to make a world for Hooper; they were the aborigines, vermin by right of law, to be shot off at leisure so that things might be safe for the travelling salesman.” 12% of the British army’s ordinary soldiers were killed during the war according to the BBC, compared with 17% of its officers. Mildly disproportionate, yes. But the utter dismissal of the struggles and deaths of those who didn’t have mansions during this era isn’t just snobbery, it’s disgusting.

(It could be I’m misreading this, but the way it currently stands this comes across as so dismissive that I almost couldn’t believe it came from the same book which created a character as interesting and conflicted as Sebastian Flyte.)

None of this will matter as you go through it, though. It’s one hell of a ride. But while there are some novels I only love in hindsight and can look back in astonishment at the ways they toyed with me as a reader (The Crying Lot of 49 by Thomas Pynchon, for example), this is the first time I remember setting a book down, and, despite really enjoying it while reading, know I’m not interested in thinking about it, ever again. There’s just not much there I think is worth reflecting on. It’s a nice pond I mistook for a great lake.