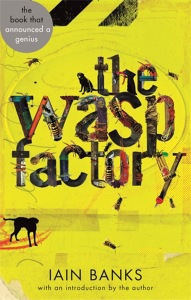 “It was just a stage I was going through.”

For some reason, I’d always thought this was a coming-of-age story in the vein of Black Swan Green or Catcher in the Rye. I don’t know how I got this impression, but it made the first few pages a surprise, let me tell you. There was less navel-gazing and more shamanistic rituals and dead animals than I expected.

Frank is young, Scottish, a bit of a drunk, and likes murders involving children.

Unrepentantly cruel characters are almost exclusively obstacles for Good People to overcome in fiction. Human monsters are such easy sources of conflict, and can create a natural end point for novels: their defeat or death. Very few people will not cheer when Voldemort gets snuffed, after all. The bloke had it coming.

To have someone who does truly disturbing things as your protagonist, to create sympathy for a devil, is risky. Maintaining reader investment while they are horrified by the main character’s actions is a hard tightrope to walk across, and I had worries that Banks hadn’t managed it, fears that he was faltering around two thirds of my way through. I was, happily, wrong.

The setting here is appropriately isolated, and trickles of rain and looming grey clouds keep the mood somber. You aren’t allowed to become desensitised to the savage acts, and the grounded setting might be part of that. This isn’t ultra-violence, it’s plain, unglamorous, human cruelty. While unsettling, you’ll want to keep reading; you’ll want to keep your eyes fixed on these horrible events just to figure out where things are going. This novel is just short enough that the occasionally slow pace never feels frustrating.

There’s a snarky tone to the narration, an acerbic wit that gives the novel a small, needed touch of levity, but it’s black humour which never feels inappropriate. Banks uses not just talent, but grace, to reveal and warn of the inner-workings of a killer.

This book puts cruelty under a microscope, and displays the thought processes and logic of a sane but angry young person.

Despite the brutal nature of many scenes, this isn’t a book about inherent evil. It’s more concerned, in my opinion, with the dangers of confusion. I can’t say more without spoilers, but it all ties together and makes every amount of sense by the end: a cycle of human callousness lead to all this pain.

Shocking but poignant, I was horrified while reading but came away pleasantly surprised at how good a novel this was.